The audio indicated that Prince Kpokpogri allegedly claimed that he slept with Jane Mena countless times from morning to evening when she visits him in his house and the dancer told him that her husband has not been able to give her the se.xual pleasure he gives her in the past 9 years of being together.

The Delta State politician also revealed that Jane Mena was the one who married her husband and not the other way round.

“Me and Jane fit dey for house dey f*ck from morning till evening. If we tire, we rest then continue. Na she marry her husband, no be the guy marry her.

We don do different types of dirty s*x. She tell me say the kind s*x wey I dey give am, her husband never give am for 9 years. Everytime I think of her, I dey get er*ction.”

Gisreel had reported that Juliana Olayode had accused the pastor of sexually assaulting her sister, in which she narrated the bitter experience in a viral video.

However, reacting to her accusations, Blessing Okoro claims the actress’s grief is not as a result of anger because she sounded like someone who has been ‘betrayed’, in other words: heartbroken.

The controversial blogger also added that the actress sounded romantic; like a person who has feelings for the estranged pastor but was subsequently betrayed.

On Instagram, Blessing Okoro wrote: “They abused your sister and you are talking with romantic voice. Mtweeeeee. You no swear for am with Bible.

“This story going viral I can’t ignore. I remember this beautiful lady saying she was a virgin, now you are calling ur so called daddy in the lord his full names. Did you people notice the sound of her voice, it was not anger but betrayal from an emotional angle of someone you feel something. All this religious people they keep proving me right that they are just a joke… you know ur pastors sexual struggle. Jokers You can imagine what she is saying, you told me you won’t touch her, I asked you not to touch her, you had struggles, blah blah blah

“I rather be controversial than be a religious hypocrite. Let’s get justice for your sister, as for you, go settle with ur daddy in the lord. I am really upset and irritated.”

Funke Akindele in a recent post on Instagram, stated that someone should learn to be quiet even if someone has a lot to say.

This is coming amidst the recent drama between Toyo Baby and her former Pastor, Timi Adigun.

Recall that Toyo in an Instagram video on Tuesday 25 January, 2022, accused Timi of taking control of her social media accounts.

In another video Juliana alleged that Timi Adigun manipulated and sexually abused her sister.

In reaction to this, Funke Akindele who is Toyo Baby’s former boss stated that she should learn to be quiet even if she has a lot to say.

Even though Funke didn’t mention Toyo in her post, but from the look of things, her cryptic post is directed at her.

To further back up her stance, Funke Akindele in another insta story stated that she thought she was the wicked one all along. 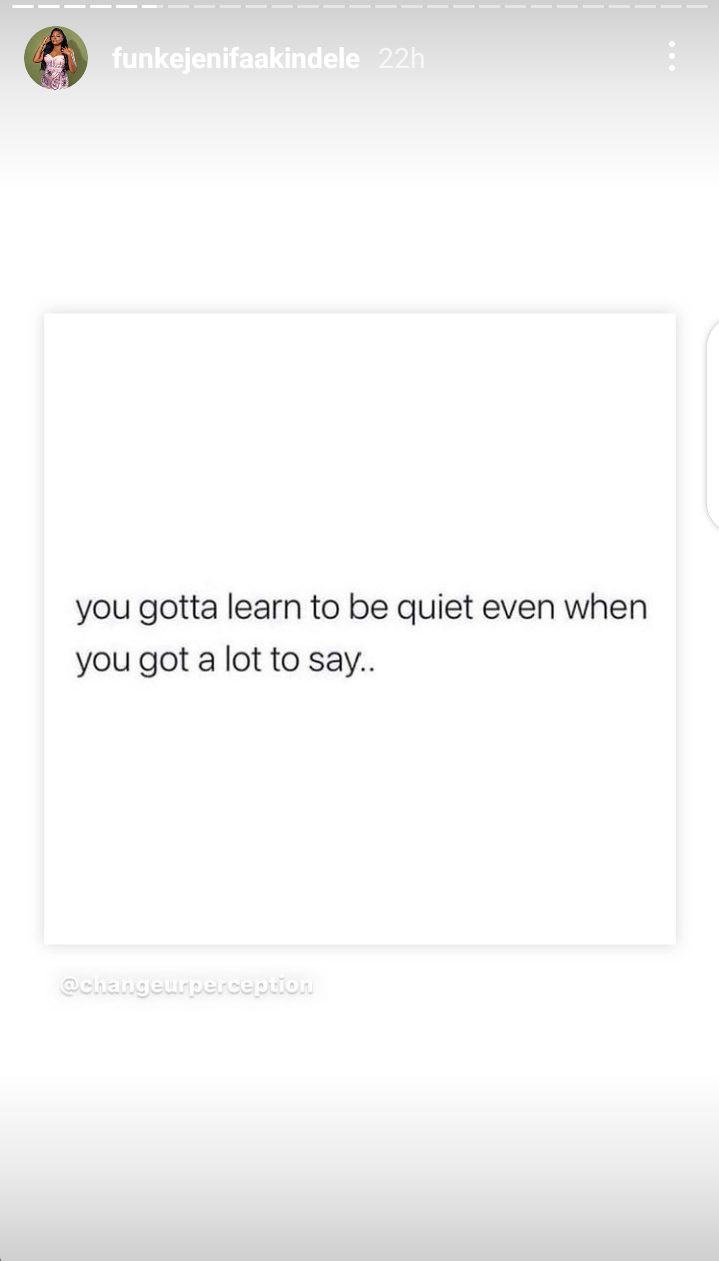