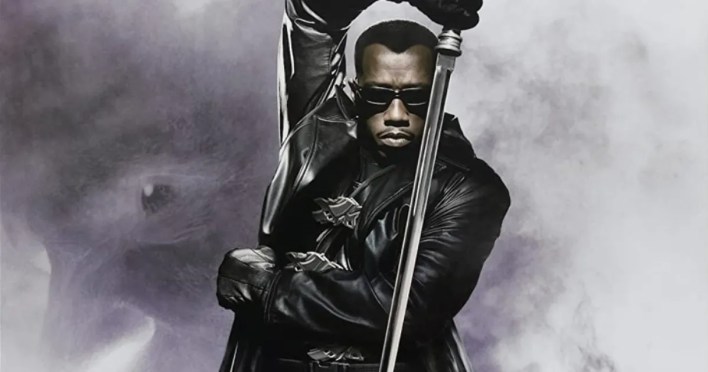 When it came out in 1998, Blade was more game-changing than people realized, and was overall very successful as one of Marvel’s first modern superhero movies. While the third movie didn’t live up to the success of the first two, the trilogy remains one of Wesley Snipes‘ most iconic roles. It is a highly entertaining and downright fun comic book series that deserves a second look.

The Blade series is about the main character, aptly named “Blade”, who was born at the same time that his mother was turning into a vampire – making him half-vampire, half-human. As the vampire “Frost” from the first movie puts it, he has “all our strengths, none of our weaknesses.” Though he does actually have one weakness – he thirsts for blood, and needs to take a serum to keep him from feeding on human blood. Though when he does… watch out.

There is no better time to revisit the Blade franchise than now. With the addition of the entire Blade trilogy to Netflix on April 1st of this year, it’s easy to re-watch the three movies. And filming starts next month for the upcoming reboot of Blade starring Mahershala Ali, which is a promising, blood-sucking addition to the Marvel Cinematic Universe.

In the 1990s, Marvel was struggling with making movies. They had many plans that fell through, including a Fantastic Four movie that even got made, but was never released. Then-executive of Marvel, Avi Arad, even paid off the budget of the film in exchange for having every single copy sent to him, which he then promptly destroyed (though it can reportedly still be found on YouTube). Marvel sheltered in the safety of TV shows after that, until the release of Blade in 1998. By then, Marvel had not released a movie since Howard the Duck in 1986.

Of all the superheroes at Marvel’s disposal, Blade was a unique choice – a Black vampire hunter with a dark story. But it was an instant hit with fans, and even critics celebrated it for what it was. Bloody, dark, and even somewhat irreverent, the movie captured the feeling of what a comic book movie should be spectacularly well. Even Roger Ebert praised Wesley Snipes in the lead role, for his show of vulnerability in the character of Blade, saying in his review that “By embodying those feelings, Snipes as Blade gives the movie that edge of emotion without which it would simply be special effects.”

Two years later, the first X-Men movie came out, funded in large part by Blade’s success. And four years after that, came Toby MacGuire’s debut in Spider-Man, which was a huge hit. But, without Blade kick-starting that massive avalanche, Marvel might not have eventually turned into the titanic franchise that it currently is. Blade should be credited more than any other movie with sparking the beginning of Marvel’s movie success.

With the first movie as groundbreaking as it was, being a superhero story and vampire story with a Black male hero, the team was able to get Guillermo del Toro to direct the second movie. They had the same writer from the first movie too, David S. Goyer, and they were ready to roll, starting plans for the sequel by 1999.

Del Toro was in a career slump at that point, and needed a big hit. His most recent big movie, Mimic, was a flop financially, and he was struggling. It might have been risky to look for that in the sequel to a comic book movie – but del Toro took the chance, and Blade II ended up being one of those sequels that is better than the original. It had an even better plot, with writer Goyer saying that he was aiming to make The Dirty Dozen with vampires. The actors were fantastic, including an early role for Norman Reedus. Goyer and del Toro were both comic book fans, so their vision of how the movie should look, and especially feel, was unified for this project. Blade II was a turning point for del Toro, giving him the success he needed to get back into things, avoid an end to his career, and go on to become one of the best modern directors.

Ebert’s uniquely fun review gave it 3.5 out of 4 stars and said, “Blade II is a really rather brilliant vomitorium of viscera, a comic book with dreams of becoming a textbook for mad surgeons.”

The third movie in the series, Blade: Trinity, was unfortunately not nearly as good. It was panned by critics and fans, with many people citing the presence of flashy fight scenes, with little or no substance underneath. This movie was also written by Goyer, like the first two, but this time he directed it as well. Not everything was bad, though – it was especially wonderful to see Jessica Biel playing a bow-wielding woman fighter who actually looked like she had the muscle to use the weapons she carried.

Talk of more sequels, or a prequel series, flitted around for years afterwards, but other than a little-known TV series, nothing happened – until now. Marvel has announced a reboot movie, which will be a part of the MCU, and might even have some crossovers with other movies. Blade starts filming next month, and stars Mahershala Ali as Blade – with Wesley Snipes’ blessing.

With the entire trilogy now available on Netflix, the franchise is worth a re-watch, not just to see the well-done foundation that Wesley Snipes, Goyer and others made, but also to get back into the world of Blade before Ali’s new take on the vampire hunter.