Nigerian musician, Azeez Fashola who is known as Naira Marley has dropped a new leg-walk dance.

The award-winning musician and music executive shared a video of the dance on his verified social media handle on the popular micro-blogging platform, Twitter.

The dance comes just a few days after he released his Christmas jam dubbed, Kojosese. Watch the video below;

In other news, the beautiful sister of Naira Marley, Shubomi has unveiled her latest car which is a Mercedes Benz car.

READ ALSO: Guy Damages His Expensive Phone Because Of His Fiancee, Claims She Is Putting Him Through Hell – VIDEO

The beautiful brand influencer and member of Naira Marley’s MARLIAN Music label made this known in a recent post she made on the popular social media platform, Instagram.

After initially making the announcement, she has unveiled the vehicle for her fans and followers to see and she did that in a recent post she made on Instagram.

In her latest post, she officially unveiled the car by sharing some photos with the caption;

“I’m not perfect but blessings keep on coming 🙏🚘🥳”

Sensational singer and songwriter, Olakira, has been named a brand ambassador for Maserati, an Italian luxury carmaker.

On Monday, January 24, 2022, the singer revealed the new ambassador contract in a Twitter post, as he celebrated a great win to start the new year.

Olakira who came to the limelight with the release of his hit song “Maserati”, uploaded a video of the latest news and said that it still seems like a dream to him.

To complete the ambassador deal, Olakira was given a brand new Maserati car, by the company. He expressed his admiration for the brand and stated that he feels honoured to be affiliated with it.

”Starting my own 2022 with this win! feels like a dream but an official deal with Maserati is now sealed & signed #OlakiraXmaserat”

The latest development was shared by IG gossip blogger, Gistlovers who disclosed that her lawyer is currently running helter-skelter to meet her bail conditions as none of her people has shown up yet. 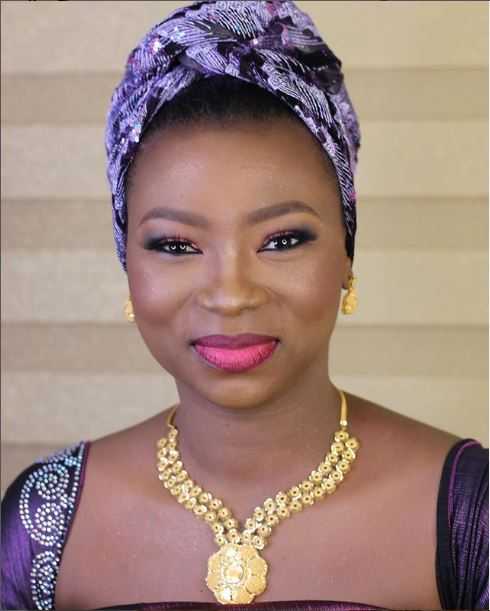 It comes amid the ongoing online squabble between Jaruma, Regina Daniels and her husband, Ned Nwoko.

“Otun ti zeh ooo😂😂😂100 mefa ni werey koole.
Hauwa wey Dey call herself Jaruma Re Arrested and Remanded in Suleja Prison as her lawyer runs around to meet the bail condition, but as at now Jaruma is till cooling off for Suleja prison as none of her people don show up.

Hauwa Saidu Mohammed a.k.a Jaruma was arraigned on count of Defamation of Character, Injurious Falsehood, Drug Abuse,Criminal Intimidation and Publication of False News with Intent to Cause Offence Against the Public Peace at the Upper Area Court, Zuba FCT Abuja where she pleaded not guilty. Her counsel made an application for her bail and the court made an order for her to be remanded in prison custody till Friday the 28th day of January, 2022. Meanwhile, the substantive case has been adjourned till 23/02/2022.” 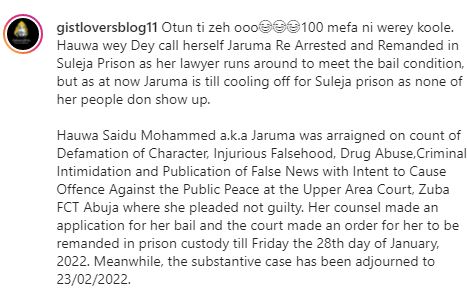 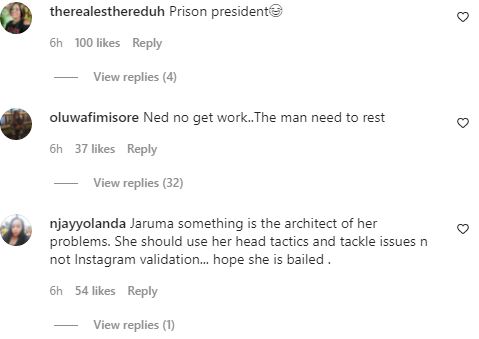 Dare urges Information Ministry, FCT, others to include NYSC Museum in Museums, Monuments