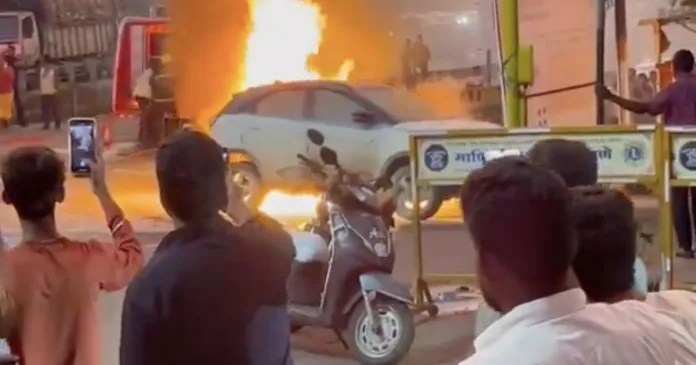 A Tata Nexon EV has caught fire near Vasai in Mumbai, as per several tweets showing the burning car in a video. The reason behind it is unclear and should require an investigation for more details. This comes a few days after Tata launched a new version of the car called the Tata Nexon EV Max. The incident came to light after a few people captured the video of the burning Tata Nexon EV. As per the Twitter user, the car caught the flames near Vasai in Mumbai. Here’s a video of the same.

As we can see in this video, a white Nexon EV has caught fire and the fire brigade has reached the location to put out the fire.

Another video, which takes us to the back of the car shows that the local police have also arrived at the location to keep the traffic going smooth. The video also shows the car number plate green which confirms that this was an electric variant of the Tata Nexon.

This is after 10 months that we are getting to see a Tata Nexon EV burning report in India. In August 2021, a Tata Nexon EV had burnt to ashes in Sadashivnagar in Bengaluru. Many electric vehicles have been catching fire in recent months but all that were electric scooters. They were catching fire because of the battery the company was using. Now that an electric car has caught fire in the financial capital of India, it should take some time for the investigation reports to be revealed.

Tata Nexon EV is one of the best-selling electric cars, as per reports it accounts for more than 95 per cent of EV car sales in India. The Nexon EV can deliver a driving range of up to 312 km on a single charge thanks to the 30.2Kwh battery packed inside it. While the Tata Nexon takes up to eight hours to charge from 10 to 90 per cent using a normal charger, it can also be fast-charged with the help of a DC charger which can charge the car in just one hour. It can churn the maximum power of 127bhp and a peak torque of 245Nm.