Everton have signed Belgium international Amadou Onana from Lille for an undisclosed fee, understood to be up to £34million, agreeing a five-year contract.

The 20-year-old central midfielder, considered one of Europe’s most exciting talents, was poised to join West Ham until Everton stepped in to match their offer last week.

Onana was in the stands to watch Everton’s opening game against Chelsea and becomes their fifth signing of the summer following the arrivals of defenders James Tarkowski, Ruben Vinagre and Conor Coady and forward Dwight McNeil. 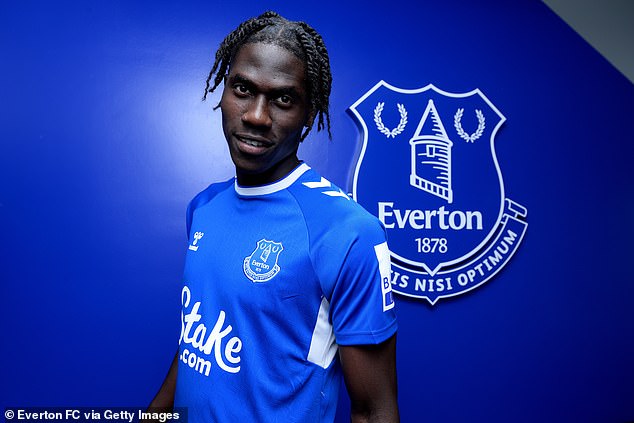 Powerful, fast, technically skilled and with the ability to be used in a range of central-midfield roles, Onana revealed the chance to play for manager Frank Lampard, passionate fans and ‘one of the biggest clubs in England’ were key to him committing his long-term future to Everton.

‘It feels great to join Everton. I know it’s a big, big club, one of the biggest in England,’ Onana told evertontv. ‘It’s something I want to be part of for many years.

‘Everyone here showed they really wanted me and they have a plan for me, so I really appreciated the talks I had with the manager and Director of Football [Kevin Thelwell]. They told me how they wanted me to play and I enjoyed it.

‘They both have a lot of ambition and that’s the type of guy I am so it matches.

‘The manager was one of the big reasons. He played at the highest level, won many things and was a midfielder, too. It means a lot to have interest from him and I think he can teach me many things.

‘The Everton fans are amazing. I saw their support last season and it’s also one of the reasons why I chose Everton. I am looking forward to meeting them at Goodison and, just hearing about the atmosphere, I get goosebumps.

‘Blue is my favourite colour, too! I am going to give everything for the club and our supporters.’

Born in the Senegalese capital of Dakar, Onana’s path to Goodison came via Brussels, playing his youth football with Anderlecht, RWS Bruxelles, and Zulte Waregem before signing with German club Hoffenheim in July 2018.

After impressing there and during a season with Hamburg, Everton’s new number eight joined Lille last summer and caught the eye in France, making 42 appearances across all competitions, including eight in the Champions League.

Having played through Belgium’s age groups – including captaining the Under-21s – Onana’s progress led to him earning his senior international cap against the Netherlands in June.

‘I think I can play every position in centre midfield, whether that’s as a holding midfielder or a box-to-box as a number eight. That said, wherever the manager needs me, I will play there,’ added Onana.

‘I chose the number eight shirt because I am a big fan of Kobe Bryant. His work ethic and the way he was inspired me so I’m happy to have that number at Everton.

‘I’m just excited to be on the pitch and show what I can do and help the team as much as I can.’

Everton Director of Football, Kevin Thelwell, said: ‘We are delighted to complete the signing of Amadou and for him to commit his long-term future to Everton.

‘He is one of the most sought-after young midfielders in Europe for a reason and has many attributes to benefit our squad. We are confident he can be a popular player with Evertonians for many years to come.

Manager Lampard added: ‘Amadou is a player we were really keen to bring to Everton. He has many great qualities to help strengthen our midfield and, at just 20-years-old, has massive potential to get even better.

‘I spoke to him about why Everton was the right club for him and we’re all looking forward to him showing what he can bring to the team.’

How to make your own deodorant at home