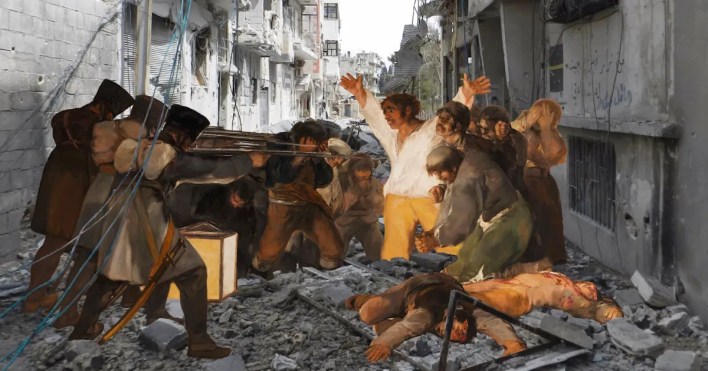 “I feel that the most basic human right is to be able to express yourself, and when that is limited, you’re cutting off one’s humanity. That’s happening in Syria and Russia. Around the World. Whether you see Hocus Pocus as art, versus the human cry and necessity to give voice to grievances, to horrors, to trauma. It’s something that advances society in the long term. If we don’t have these symbols, these signposts, we are much more likely to forget. So, I do believe in the long term, that long moral arc of the universe, the artist plays a fundamental role.”

David Henry Gerson’s debut feature documentary The Story Won’t Die looks at the largest ongoing displacement of people since World War II through the eyes of those directly effected. Syrian artists in the documentary use their art to process and protest, including first-hand accounts from rapper Abu Hajar, post-Rock musician Ana Maghrebi, members of the first all-female Syrian rock band Bahila Hijazi and Lynn Mayya, break-dancer Bboy Shadow, choreographer Medhat Aldaabal, and visual artists Tammam Azzam, Omar Imam, and Diala Brisly. War riddles their community. They use their art to fight for what is right. The Story Won’t Die provides perspective on the meanings of justice, peace, and the necessity of freedom of expression.

Gerson’s work as director of The Story Won’t Die has been well-received. The documentary is an official Hot Docs Selection, and he was awarded Best Director for it at Doc LA. It’s available now, worldwide on major platforms including Apple TV, Amazon Prime Video, Google TV, Vimeo, and more.

Gerson recently joined Movieweb to discuss the documentary, its success so far, and the process of creating it.

“I made a short film called All These Voices in 2015 that won the Student Academy Award that was really about artists, experimental theater artists, based on a true story in Poland after WWII. And really the quest was how to give voice to horror and to war. With that in mind, at the Student Academy Awards that year, there was a short doc about Lesbos, Greece and their refugee crisis. I think that really opened my eyes,” said Gerson, discussing his inspiration for the documentary. “This is the largest displacement of people since World War II, over the last decade in the Syrian civil war… something in me says we need to pay attention to this.”

Gerson’s initial intentions were to make a narrative film, of which he’s still working on, but things changed during his research. “I started finding these great stories of not the image I had initially thought a refugee looks like. People who were not seeing themselves as victims. People who were actively looking into that darkness and making something of it. I started meeting with these inspiring people, and the more people we met, the more it opened and expanded.”

Among these inspiring people, notably, is choreographer Aldaabal. “He talks about his year and a half long journey across Europe, from Syria to settle ultimately in Berlin. While he was on the streets, freezing with his friends, he actively said, and forget the religious aspect, but he said, ‘God is dead to me. God wouldn’t have allowed this to happen. I’m going to take these experiences and transform them into my art.’ That’s very inspiring, to be literally starving and freezing on the side of the road and saying, ‘I’m going to use this as part of my craft, as part of what I create.’”

“There’s sort of two approaches,” said Gerson, explaining how they found the artists for the documentary. “I started off thinking about processing, and art as processing. There were certain artists in the film whose work had gone viral on Instagram. Like Tammam Azzam. Paintings and mashups that have taken sort of iconic works of the canon of art, mashing them up against the horrors of Syria as a way of bringing attention to what’s going on. Then through CNN, BBC articles, and through the internet, reaching out to people… we had a co-producer named Abdelaziz Alhamza, and he really opened my eyes to how art is also used as protest. It introduced us to Abu Hajar, the rapper… and then we met people while we were traveling around Lesbos… it’s kind of like you go, you meet one person, one person and somebody else, suddenly, you’re sort of meeting everyone.”

He continued, speaking of their work and his, “The artists’ work in and of itself was very special. I felt like my job was relatively easy. I just had to give them a platform and it was going to be special… with any festivals, and getting attention, it’s a challenge. It’s a slog, it’s a crapshoot, you never really know… and I’m just very grateful to all the festivals that have welcomed the film.”

In addition to being a Hot Docs Official Selection and winning Best Director at Doc LA, The Story Won’t Die recently won an award at the Below Ground Film Festival in Bologna, Italy, Best Feature Doc at FIC Auto Guadalajara, and is an Official AFI Docs and Watch Docs Selection.

‘Westworld’ Season 4: Why the Premiere’s Time Jump Is What the Show Needed