On March 31, 1992, the age of the battleship came to a final and complete end, with the decommissioning of the USS Missouri (BB-63), one of the United States Navy’s four Iowa-class vessels that had been constructed during the Second World War. The U.S. Navy had not only been the last operator of a true big-gun battleship, but it has the distinction of being about the only major naval power to never lose one of its capital battle wagons at sea.

One fact to remember is that the age of the battleship – despite all the mystique and even hype surrounding what were arguably the largest mobile military platforms ever constructed – was fairly short-lived. The first battleships to be sunk were the Imperial Russian Navy’s pre-dreadnought vessels Poltava and Pobeda at the Russian naval base at Port Arthur at the start of the Russo-Japanese War in December 1904. Six other Imperial Russian Navy battleships were subsequently sunk at the Battle of Tsushima Strait, arguably the only true decisive battleship-to-battleship slug match in naval history.

Several British battleships, along with multiple French, Austro-Hungarian, and Greek vessels, and one German battleship were lost in combat during the First World War. The losses of capital warships were even greater during World War II when such notable battleships as Germany’s Bismarck, Scharnhorst, and Tirpitz; the Royal Navy’s HMS Prince of Wales; France’s Strasbourg and Jean Bart; and several Imperial Japanese Navy battleships including Kongō, Musashi and Yamato were all sunk in combat.

U.S. Warships that Have Been Sunk

Though it is true that four United States Navy battleships were sunk at Pearl Harbor while docked at port, only two of those vessels were considered a complete loss. That includes USS Arizona (BB-39), the second and last of the Pennsylvania-class of “super-dreadnought” battleships, which was hit by four armor-piercing bombs; and the Nevada-class USS Oklahoma (BB-37), which was actually salvaged. However, unlike most of the other battleships that were recovered following the December 7, 1941 attack on Pearl Harbor, it was decided that Oklahoma was too damaged to return to duty.

It is thus important to note that no American battleship has ever been sunk at sea in combat.

Still, several American battleships were expended as targets in peacetime, with the pre-dreadnought battleship USS Texas having the dubious distinction of being the first capital warship to be used as a target ship. She was sunk in the shallow waters of Chesapeake Bay in March 1911 and later was used as a gunnery target.

A similar fate had met USS Indiana (BB-1), the lead vessel of her class and the first battleship in the United States navy that was comparable to foreign vessels of the era. She was used as a gunnery target in November 1920, while her sister vessel USS Massachusetts (BB-2) was sunk off Pensacola, Florida as an artificial reef. 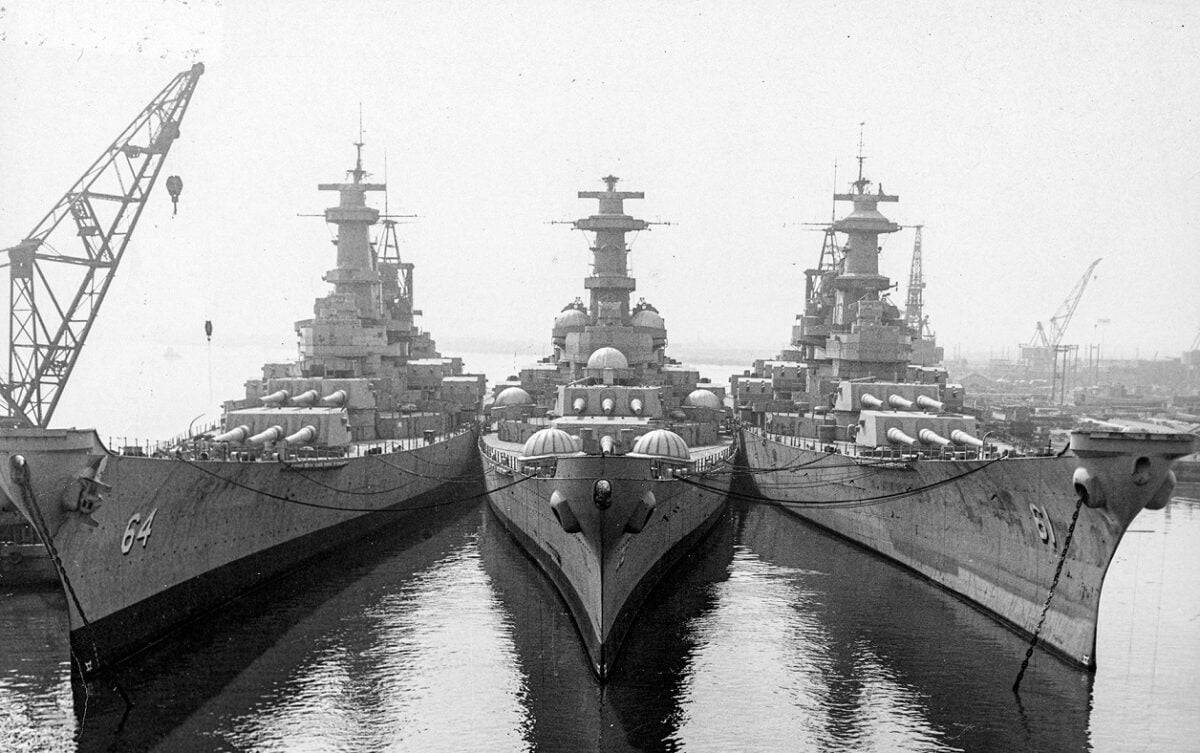 USS Alabama (BB-8), USS Iowa (BB-4), USS New Jersey (BB-16), and USS Virginia (BB-13) – all built before the First World War – were also subsequently used as gunnery targets. After the Second World War, several U.S. Navy battleships were expended as targets during the Operation Crossroads nuclear tests in the Pacific, and these included USS Arkansas (BB-33), USS Pennsylvania (BB-38), USS New York (BB-34), and USS Nevada (BB-36). It was a sad end to what had been some of America’s most capable warships.

Yet, the fact remains it took U.S. military might – including the use of nuclear weapons and other explosives – to actually send the Navy’s battleships to the bottom of the ocean.

Now a Senior Editor for 1945, Peter Suciu is a Michigan-based writer who has contributed to more than four dozen magazines, newspapers and websites. He regularly writes about military hardware, firearms history, cybersecurity and international affairs. Peter is also a Contributing Writer for Forbes.

[VIDEO] After Watching This Clip, Actor Rob Schneider Has a New “Theory” About These “Food Shortages”

Ramaphosa: The struggle of SA's women is not yet done

Brain Teaser: Can You Move 3 Matchstick To get 6 Squares Within 20 Secs?

Man killed over a bottle of water at Gateway Mall