In view of the above, Npower Applicants are advised to kindly check the NASIMS portal or dial the NSIP self service code *45665# to check their application status and follow the instructions for biometric capturing. 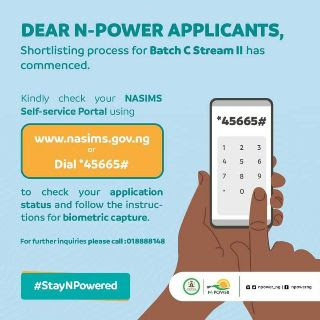 Naijaonpoint Media reports that the Federal Government of Nigeria through the National Social Investment Management System (NASIMS), has announced the commencement of Npower March stipend payment to Npower beneficiaries.

This online news platform understands that in a bid to put smiles on the faces of Npower Batch C stream 1 beneficiaries, following the delay in their March Npower stipend payment, the National Social Investment Management System (NASIMS), has announced that the Npower March stipend payment has commenced.

Meanwhile, NASIMS apologised to a handful of Batch C Stream 1 Npower beneficiaries who have had a series of payment issues such as FAILED PAYMENT, etc, assuring that following the initiation of the March Stipend payment, beneficiaries whose issues have been resolved, would also be credited

According to Nasims, the payment of 2022 February Stipends was successfully initiated. The crediting of accounts will begin as soon as possible. This update was distributed to all recipients of January Stipends and other pending payments who had not yet received payment

Naijaonpoint Media reports that the Minister of Humanitarian Affairs, Disasters Management and Social Development, Sadiya Umar Farouq on Wednesday disclosed that the Federal Government is committing the sum of over N5.9 billion on training, and tooling and monthly stipends for the Batch C beneficiaries of N-Power programme in Kano State

Naijaonpoint Media reports that the nasims.gov.ng portal login for Npower batch c test is currently open. Login NASIMS Portal is nasims gov ng. Here is instructions on how to login to nasims.gov.ng and write the npower nasim login via the official website onlinetest.nasims.gov.ng