A video of popular married comedian, Cute Abiola and his alleged side chick has sparked reactions on social media.

Recall, hours ago, anonymous and controversial writer, Gistlovers alleged that the comedian is having several amorous affairs despite being married. 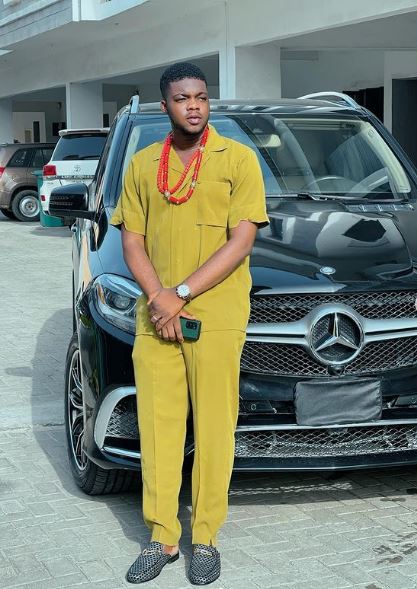 It was also alleged that his intimate relationships with several ladies is what made his marriage shaky and now on the verge of collapsing.

He was also accused of sleeping with ladies in exchange for roles in his skits.

In a recent development, a loved-up video of Cute Abiola with one of his alleged side-chic, Mandy Kiss has emerged, thereby triggering reactions online.

Nollywood actress and producer, Tonto Dikeh refused to budge from the looming banter between her and journalist, Kemi Olunloyo as she has sarcastically mocked her for volunteering to assist the journalist to overcome her mental illness.

Kemi Olunloyo said in the video that Tonto Dikeh was merely bragging and that he was not the one who wrecked the property. She went on to brand the actress a clout chaser for attempting to sell a ‘power image’ to the public.

Tonto Dikeh dared her to name the people who provided her with such personal information.

Tonto Dikeh took to her social media stories in response to the video to threaten Kemi Olunloyo with jail time.

“Madam Kemi please mention the name of this person let’s confirm!! They already told me that you are mental challenged but I may just be your cure!!? Na Ogun true true go help.ke put you back in prison. Agbaya mummy. If you don’t mention the name of that person then you have bought the biggest bad market ever. I will help curb this your veil mouth. M#t kill you there….”.

Kemi Olunloyo had earlier wondered why Tonto Dikeh was wishing her evil.

“I have the right to ask why Tonto was bragging about her ex boyfriend’s mansion demolition. I supported Tonto Dikeh when she was going through extreme domestic violence and purchased a gun in Ghana attempting to kill Churchill her ex husband.

As she was laying curses on another journalist Azuka Ogujuiba, I counseled Azuka on how to handle a dirty bitter divorce of public figures. This is what I’m teaching my journalism interns @2222mediaschool now. After leaving Port Harcourt prison, singer Dencia fed me, bought me new clothes and bought me a ticket to travel home to Ibadan. My daddy late Alabo Graham Douglas housed me for 30 days in his hotel and took me to meet Pastor Ibiyeomie who I’ve never asked a single Naira from till today.

Dencia started the fundraiser, Yele Sowore the 3rd donor sent me money from New York and promoted the fundraiser heavily on Sahara Reporters. Tonto was the second donor with 200k, I can’t believe. It’s the same person that is professing Ogun to help me send me back to prison. Did she rush to donate that money for clout in one of the most controversial clout fundraisers known to man.

Hushpuppi wanted me to beg Linda Ikeji first, Emenike contacted me lashing out at all these “small children insulting my wellness” and paid off disgracing all the donation clout chasers”.

You Are The Most Beautiful Girl In The World – Fans Hail BBNaija Star, Erica Ngozi Nlewedim Over Her New Look

Reality TV star and actress, Erica Ngozi Nlewedim, has got her fans and followers swooning over her new look just hours after stating that her bride price is worth more than N50 million.

This comes after a Twitter user suggested that her wedding price should be $50 million due to her beauty and physical appearance.

However, the former Big Brother Naija housemate corrected him setting the record straight that her bride price is worth more.

Erica replied, “Its more than that”.

Erica unveiled clips of her stunning self in a new video, which had admirers gushing.

Her adorable new style drew a lot of praise in the comments section, with one person proclaiming her “the most beautiful girl in the world.”

lankymarry
I love u so much my queen

1chikky
The most beautiful girl in the world
20h40

A few hours ago, Erica Ngozi Nlewedim, has advised her fellow Nigerian brothers and sisters to make another country their next place of abode if they can afford it.

Erica shared this advice via her Twitter page and it comes on the back of rising insecurity in the country, from ritual killings to mob injustice, among others.

Erica bemoaned that Nigeria is not worth dying over and the citizens don’t even care, so if you have the money, you should make another country your plan b.

Parly probe into Mkhwebane should be allowed 'without delay', court told