A Zimbabwean man spent several months in the hospital recovering from a vicious attack by no less than three or four crocodiles at a fishing pond near the town of Nyamhunga.

The incident took place in January, as Alexander Chimedza arrived at the Nyamhunga sewer ponds to look for some red worms. He planned to use them as bait to catch Kariba bream, after his wife told him that she had had enough of the tigerfish that he usually brought home. Unfortunately, as soon as he approached the weed-covered banks of the pond, Alexander was attacked. He claims one crocodile tried to grab his left hand, but he instinctively pulled it away, before another crocodile managed to bite his right hand

As soon as I avoided being grabbed by the left hand, I felt another crocodile grabbing my right hand,” Chimedza told The Herald. “It pulled me into the water and twisted in one direction, and at that point, I realized that my hand would break if I resisted. So I allowed my hand to go in the direction that it twisted in.”

Right as he managed to regain his balance after being twisted like a piece of cloth, the amateur fisherman felt another crocodile come up and close its massive jaws around his Achile’s tendon, ripping it to pieces. Only instead of giving in and allowing himself to become the crocodiles’ meal, Alexander Chimedza found the power to fight back.

In what he claims was the secret to his miraculous escape from the jaws of the crocodiles, Chimedza apparently saw an opening and stuck his hand into one of the reptiles’ mouth and pushed it in as much as possible, causing water to flood the animal’s stomach. He claims the animal drowned soon afterward.

Just as he wrestled with the crocodiles, Alexander’s friends and acquaintances were pelting the crocodiles with large stones, eventually forcing them to eventually swim away, leaving the man in a pool of his own blood. He was pulled out of the water and rushed to the Kariba District Hospital, before being transferred to Mutenderi Hospital, in neighboring Zambia.

In the days and months that passed, doctors cleaned Chimedza’s deep wounds, stitched him up and performed several surgeries, including skin grafting and reconstructing his Achile’s tendon. He had at least five metallic plates surgically implanted to help fuse broken bones faster, but only one of them will remain in his body permanently.

Alexander Chimedza can no longer move his right arm at all, but the permanent platinum plate installed in his right shoulder keeps the arm firmly attached. The attack had caused it to move loosely in the shoulder socket. Doctors have also cautioned Chimedza not to move his right leg, as the Achile’s tendon needs time to heal. 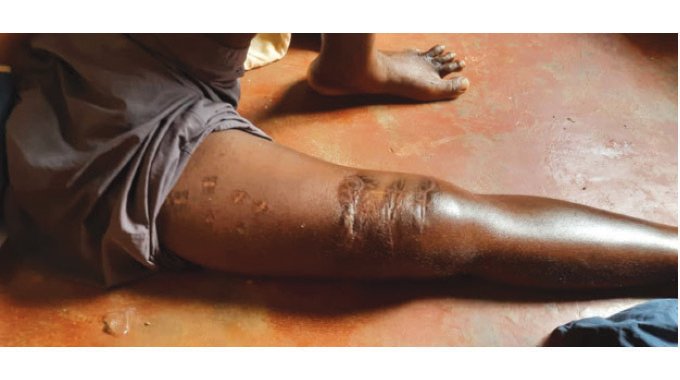 “I cannot work and fend for my family as I used to. I rely on well-wishers for survival now. I feel that a wheelchair will go a long way to ensure that I don’t rely on my wife for everything,” the man said.

Despite the hardships he has to overcome, Alexander Chimedza considers himself lucky to be alive. After all, how many people can say they survived a crocodile attack, let alone one by three or four of the deadly reptiles?

Poor people will not go to heaven – Ugandan minister says

“Poor people will not go to heaven because they insult God through lamentations and accusations every day”.

A MAN is being held in police custody in Chimoio, central Mozambique, after admitting attempting to sever a taxi driver’s genitals.

The suspect told officers he posed as a customer to lure the taxi driver to a forest, where together with an accomplice, they assaulted the victim using blunt objects.

The unnamed suspect says he is remorseful and intends to help police to track down his partner who is on the run.

It’s not known why the taxi driver was targeted, but bald men have in the past been targeted by people seeking to use their body parts for ritual purposes.

Lovely Abella And Benj Manalo Wedding, When Did They Get Married?

Who was Hard Quiz Maria and what was her cause of death?

Two hotel workers die in their sleep in Calabar