A Nigerian man identified as Babajide has revealed the quit notice which his landlord served him over his conduct in the house.

The landlord in the notice, ordered the tenant to vacate his property for bringing too many girls to the house for sxxual activity.

The landlord further stated that he has been complaining to him about his sxxual activities in the house, but he refused to desist from bringing in ladies.

“Your tenancy agreement will not be renewed. Your act of prostitution in which several girls are brought to the apartment occupied by you can no longer be accepted.

Several warning have been handed to you to desist from your indiscriminate sxxual activity to no avail. You are hereby given till the end of November to vacate the apartment currently occupied by you”, the landlord wrote. 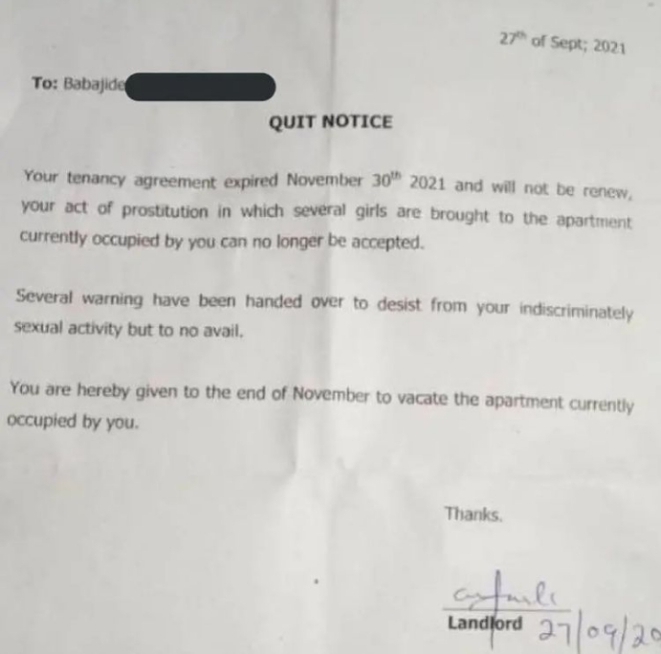 Netizens have reacted funnily to a post of Bella Shmurda claiming heaven is his goal and has 0 body count till marriage indirectly claiming to be a virgin and netizens seem not to believe him.

Bella Shmurda gave his fans the chance to ask him anything and a curious one asked him about his body count and he replied claiming that he has 0 body counts till marriage and moreover heaven is his goal.

Netizens reacting to that made fun of him with some saying heaven is their goal as well so he should have a relationship with them so they can both work towards their heavenly goal while others only laugh at him.

Bella Shmurda claiming to be a virgin seems to be a surprise to a lot of people but the possibility of it being true is very high because not everyone who lives a rascal life is a bad boy or girl and he might be one of those who do that to cover up their weaknesses.

Some people seem to be on the side of Bella Shmurda congratulating him for having 0 body count and making up his mind to remain like that till marriage and also making heaven his ultimate goal as that is a very nice thing.

Funke And I Are Still Friends, We See Each Other Everyday

Nollywood actress Eniola Badmus has shot down rumors that she is at loggerheads with her best friend Funke Akindele.

Recall that actress Eniola Badmus organized an event to mark her 20yrs on Stage Celebration a few months ago. Funke Akindele did not show up at the event of Eniola organized by her best friend which caused people to talk.

According to Cutie the blogger, Funke Akindele didn’t go out for her bestie Eniola Badmus because Toyin Abraham and Iyabo Ojo along with some others were there and she wanted to keep her peace insinuating that there’s a problem between these 3 ladies.

In a new development, Eniola Badmus has slammed critics who are spreading rumors that the two ladies; Eniola and Akindele are fighting each other which is why she did not attend her friend’s 20 years celebration in the industry.

In a post sighted on Eniola’s page, she said, “Guys, I’m sick and tired of y’all insinuating @funkejenifaakindele and I are fighting for no singular reason……In case y’all don’t know this woman right here is my ride till the end, I love her from the bottom of my heart and what we share is beyond friendship…..

we talk every day, we see almost every other day, the fact that we don’t post our moments lately doesn’t mean we are fighting!!! We are only saving it for a bigger picture and we need to keep y’all in suspense…..

Lafunky is my blood and flesh……y’all should please stop insinuating! We are good and forever good….. Maybe not necessary but Just need to put this out here for clarity! That’s my homegirl here! Oya e file fun Lafunky”.

The Bizarre Death of a Finnish Film Star

Sijibomi Ogundele: One man that is poised to raise the standard of luxury living in 2021

Sijibomi Ogundele: One man that is poised to raise the standard of luxury living in 2021