More than 50 migrants over 30 were registered as children in the last decade after lying about their age upon arriving in Britain, according to Home Office figures.

Data obtained through Freedom of Information (FOI) requests reveals that 52 in total managed to claim that they were children in initial checks, before being found to be 30 or older.

Figures also showed that 1,500 adult migrants claimed to be children in 2021.

In an eight-year period, from 2012-2020, 355 migrants a year on average claimed to be children and they were found to be adults after more checks.

And in 2021, almost two thirds of resolved age disputes showed that the claimant was an adult. 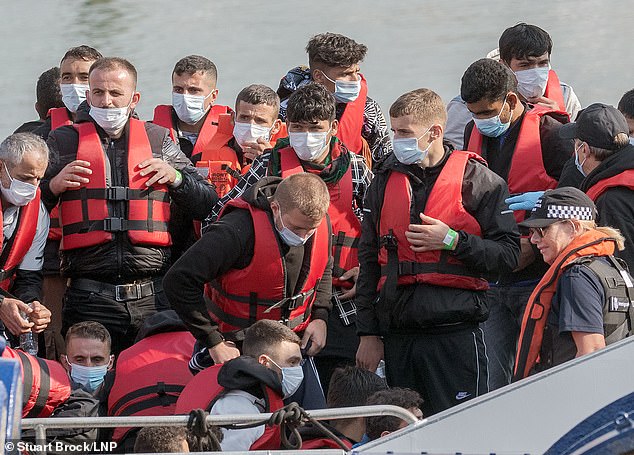 Data obtained through Freedom of Information (FOI) requests reveals that 52 in total managed to claim that they were children in initial checks, before being found to be 30 or older. Pictured: Migrants are escorted to Dover Docks on August 18

Officials unsure of ages of a young migrant have previously had to treat them as children.

This was unless their physical appearance or demeanour suggested they were 25 or over.

According to the Telegraph, initial age checks involve migrants being shown a piece of cardboard with 1 to 63 written on it and asked to point at one of the numbers.

The efficacity of these checks has now been thrown into doubt due to the new Home Office figures.

And further concerns have been raised about the system after adult asylum seekers previously ended up in schools with teenagers.

Additionally, one asylum seeker, Ahmed Hassan, told border officials he was 16 when he entered the country before he set off a bomb at Parsons Green in 2017 and injured 23 people. 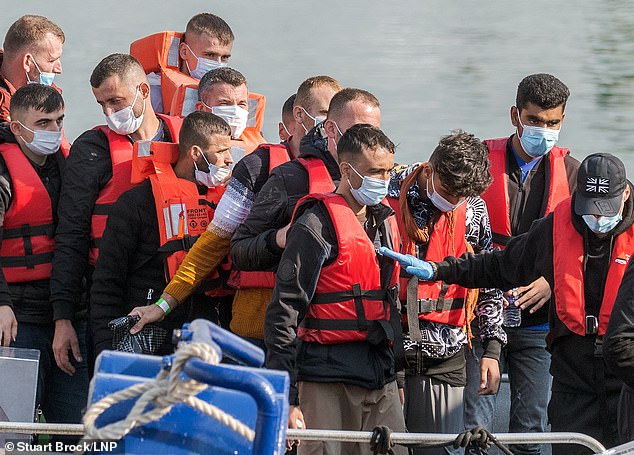 In an eight-year period, from 2012-2020, 355 migrants a year on average claimed to be children and they were found to be adults after more checks. Pictured: Migrants are escorted to Dover Docks on August 18

Rules were tightened earlier this year by the Home Secretary, who now requires officials to carry out more checks on people who appear to be over 18 and are trying to pose as a child.

She has said that she will do what it takes to remove foreign criminals and illegal migrants after revealing the Home Office had deported more than 1,700 foreign offenders this year so far.

This included 487 Albanians- double the amount of those deported at the same time last year.

Additionally, a unit is being created to assess people who claim to be under 18.

Methods could include X-rays of their bones, which would be similar to some EU countries and the US, who use them to verify the ages of migrants.

But these methods are expected to only be used on those who are presumed to be giving a false age to enter Britain. 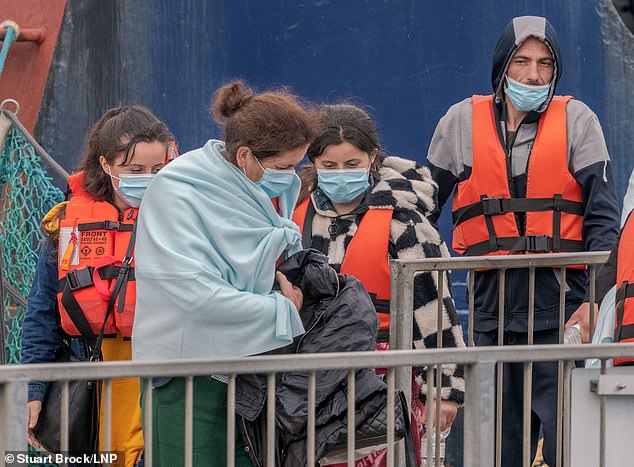 Record numbers of migrants are crossing the channel. Pictured: Migrants arrive in the UK and are taken to Dover Docks

It comes as people smugglers who transport young-looking migrants across the channel are suspected of encouraging them to destroy their documents.

They exploit the legal loopholes as unaccompanied children have a higher probability of being granted asylum.

Additionally, if their claim is rejected, their chance of being detained or removed is smaller.

Alp Mehmet, chair of Migration Watch, told the Telegraph: ‘These are astonishing figures that reveal a seriously worrying situation. There is absolutely no excuse for placing people much nearer middle-age than childhood among vulnerable minors.’

‘No individual, where doubts about age exist, should be allowed anywhere near vulnerable youngsters, in any setting. The safety of our children has to be paramount.’ 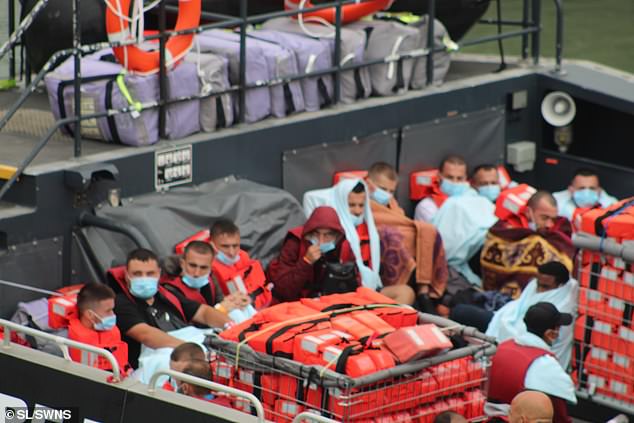 The Ministry of Defence yesterday confirmed new figures for the numbers of migrants crossing the channel- with 606 coming over on Wednesday.

This brings the total for August to 4,765, which is the second highest month on record.

The rate of migrants crossing the channel is double last year- with more than 21,000 making the journey in 2022.

The boats, called ‘crew transfer vessels’, hold 92 passengers and can get almost 500 migrants to land in one go.

Critics have labelled the Navy and Border Force a ‘super taxi service.’

A Home Office spokesman said: ‘We are taking a holistic approach to prevent asylum seeking adults claiming to be children, or children being wrongly treated as adults – both present serious safeguarding risks to children.

‘Age assessments are incredibly challenging and our reforms through the Nationality and Borders Act 2022 aim to make assessments more consistent and robust.

‘That is why we are establishing a National Age Assessment Board with expert social workers and enabling the use of scientific methods to improve decision making and ensure any disputed decisions are resolved quickly and conclusively.’

Trio of septuagenarians win the Nobel Prize in Physics; pioneers of the quantum world

As protests spread to universities, Iran’s president tries to quell the unrest