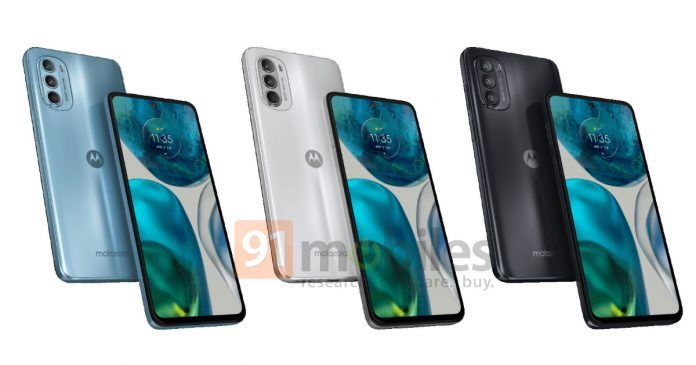 The company is currently mum on the launch of the Moto G52 in India or any other markets. Meanwhile, design renders of the upcoming Motorola smartphone have leaked online. Let’s take a look at the Motorola Moto G52 design renders, specifications, features and other details leaked so far.

Motorola will launch the Moto G52 later this year in select markets. Ahead of the launch, some key details of the phone have leaked online. A new report by 91Mobiles and tipster Evan Blass has leaked the key design details of the Motorola smartphone. The device is codenamed Rhode. It will be a mid-range smartphone without any 5G network support. Therefore, we can expect the device to debut for under Rs 15,000 in India. Blass claims that the phone will feature a Snapdragon 680 SoC.

The tipster has listed down the device’s key specs as well. The phone will sport a hole-punch cutout at the top centre for the front camera. Blass claims that the phone will sport a 6.55-inch Full HD+ display. It will be an OLED panel featuring support for a 90Hz refresh rate. While the side and top bezels are thin, the chin is slightly thicker.

On the back, the phone has a triple-camera setup. The text on the camera module confirms the main camera sensor details. Motorola will launch the device with a 50MP main camera sensor. It will be accompanied by an 8MP ultrawide camera and a 2MP depth sensor. For selfies, there will be a 16MP front camera.

The device will launch in three colours – Black, White and Blue. It will have dual speakers and a USB Type-C port. The right edge of the phone house the power and volume keys. Blass further claims that the phone will launch with 4GB/ 6GB of RAM along with 128GB and 256GB of internal storage. The device will pack a 5000 mAh battery. There is no word on the fast charging support at the moment. Lastly, the phone will run Android 12 out of the box and is expected to run MyUX on top.

Quiz: Can you name which club QPR sold these 23 players to from the last decade?

Who Is Gabriella aka Gabi Tostenson and What Happened To Her?

With your support, I will win, Tinubu tells Bauchi delegates