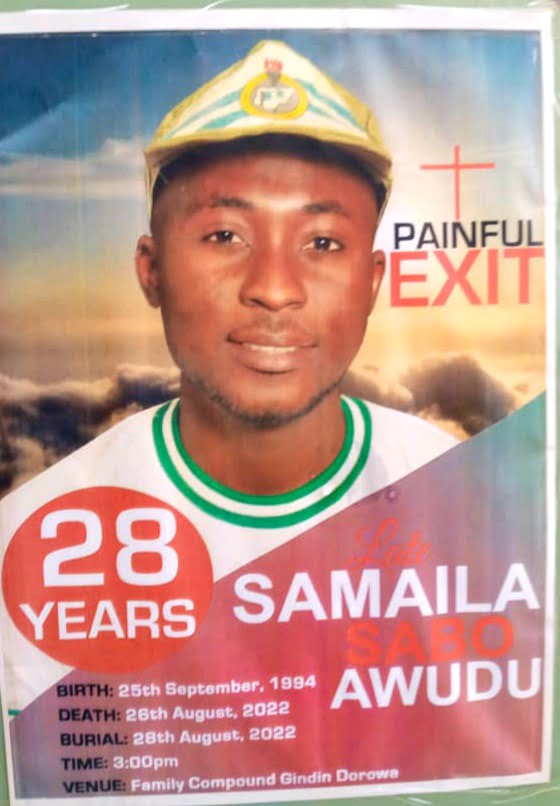 A member of the National Youth Service Corps (NYSC), Samaila Awudu, has been murdered in his lodge around Adamawa’s capital, Yola.

Evidence on Sunday night was that the incident took place on Friday when five armed assailants stormed the lodge and attacked the corps member, injuring him.

He was rushed to the Federal Medical Center (FMC), located in Yola South, where he later died.

A corps member who witnessed the incident said that when the killers arrived at the lodge, they locked all the doors of the other corps members before going to Samaila’s room.

NAIJAONPOINT who objected to his name said: “They used an ax to cut him and thought he was dead. Maybe they were hitmen, we don’t know. Right now we are all living in fear.”

Also speaking about the incident, Adamawa State Police Public Relations Officer SP Sulieman Nguroje said the State Police Command under CP Sikiru Akande is already conducting an investigation to find out the individuals behind the murder.

“We assure all members of the public that this is an eye opener as this is the first time this sort of thing would happen in Adamawa state, and the command has already met with NYSC officials so that life of NYSC members in Adamawa State could be secured.

“When the incident happened, the police commissioner drove to the crime scene and was the first to take him to the hospital himself,” Nguroje said.

Buttigieg looks back on a year of parenthood

Where is Killer Megan Hargan Today?

Man shot in the chest in Manayunk: Philadelphia Police Department

Man at Lake Oswego arrested for arson in Astoria

Chatsworth Burning Man sculpture to go up in flames – bbc.com

In the wake of Fiona, Newfoundlanders fear the sea in communities that have thrived on the sea for centuries.

Dozens of tickets, many arrested on Panda game day