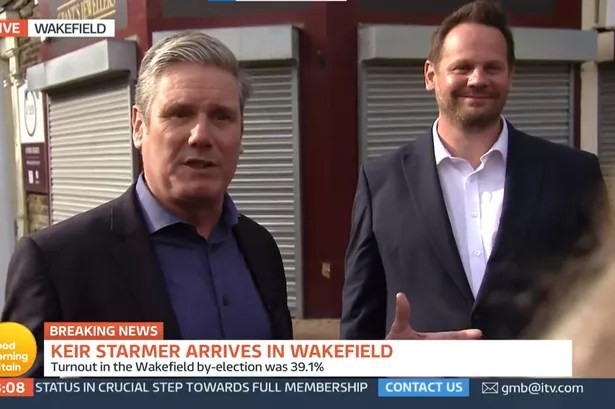 Labour has won back Wakefield in a by-election victory which has been hailed by Sir Keir Starmer as a ‘great result’ that will lead to him winning a majority in Parliament at the next general election.

The Labour leader, who visited the Yorkshire constituency this morning to congratulate new MP Simon Lightwood, said the huge swing to Labour was a ‘vindication of all of our hard work over the last two years’.

Prime minister Boris Johnson, who learned of the result 4,250 miles away in Rwanda, said that it was a ‘tough’ by-election result but that he would ‘keep going’ and listen to what voters are saying.

So what does the Wakefield result – plus another overnight by-election defeat for the Tories in Tiverton and Honiton – mean for the leaders of the two parties?

Our Westminster editor Dan O’Donoghue is reporting on the reaction to the result live this morning and he is ready to answer your questions about the political fall-out of the Wakefield vote.

To post a question, just get involved in the comments here – or scroll to the bottom of this article.

Wisconsin’s Evers looks for boost from anger over abortion