Netizens have reacted funnily to a post of Bella Shmurda claiming heaven is his goal and has 0 body count till marriage indirectly claiming to be a virgin and netizens seem not to believe him.

Bella Shmurda gave his fans the chance to ask him anything and a curious one asked him about his body count and he replied claiming that he has 0 body counts till marriage and moreover heaven is his goal.

Netizens reacting to that made fun of him with some saying heaven is their goal as well so he should have a relationship with them so they can both work towards their heavenly goal while others only laugh at him.

Bella Shmurda claiming to be a virgin seems to be a surprise to a lot of people but the possibility of it being true is very high because not everyone who lives a rascal life is a bad boy or girl and he might be one of those who do that to cover up their weaknesses.

Some people seem to be on the side of Bella Shmurda congratulating him for having 0 body count and making up his mind to remain like that till marriage and also making heaven his ultimate goal as that is a very nice thing.

A Nigerian tiktoker with rare eyes has shared the horrible reaction of a troll on his recent video.

He was seen crying over a very mean comment which was made on one of his TikTok videos. 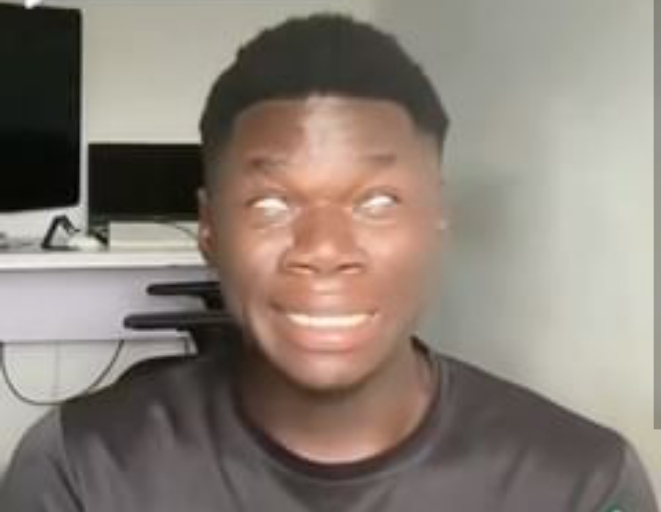 The young man, Kenzart has been making TikTok videos for a long time now. However on one of his recent video, somebody commented:

“Normal people de do TikTok, you wey blind come join, you no de shame ?. I swear you de scare people 😂💔”.

Kenzart was not happy about the message and he took to social media to cry out over this heartless comment.

Reacting to the video, Nigerians consoled him as they pleaded with him to stop caring about the harsh thing anyone says to him.

@Savagebolaji :
“We Nigerians aren’t fully aware of things like this and it’s bullying ways”.

@afrobobo;
“he’s partially blind💔💔. I know him and he’s a friend. He can see but partially.”

Organizers of the annual Headies Awards yesterday, Tuesday, May 24, 2022 released the full list of nominees for the 15th edition.

Missing in the nomination list was CKay whose ‘Love Nwantiti’ song sold over 8 Million units globally. Nigerians have taken to social media to react to the exclusion of CKay from the 2022 Headies nominees.

Whiles many expressed excitement at the nomination of their favorite, others are in the view that CKay was robbed at this years nominations. Some believe CKay who had the biggest song of the year deserve to be nominated. Below are screenshots to some reactions.

Meanwhile; The organizers of the annual Headies Awards have finally released the full list of nominees for this year’s edition.

The Headies 2022 happens to be the 15th edition of the prestigious awards show. Habeeb Okikiola, better known by his stage name Portable who had long hoped to be nominated for a Headies Award grabbed 2 nominations.

The ‘Zazoo Zehh’ hit-maker has been nominated for the Best Street-Hop Artiste category and also the in the Rookie Of The Year category. This year’s event will be held on Saturday July, 2, 2022 in Atlanta, Georgia USA.

“I know I worked for this and I know it for me base on believe @the_headies Don Show love Akoi Grace King 👑 ZAzuu Best rookie and best street pop of the year ZAzuu ZEH ⭐️Street Ti Take Over @olamide @poco_lee Kala Wuwa Ika ZEH Nation”, Portable posted on Instagram.

If paying delegates is justified, people can’t be faulted for demanding bags of rice before they vote – Shehu Sani

If paying delegates is justified, people can’t be faulted for demanding bags of rice before they vote – Shehu Sani

FG to deploy surveillance cameras for security at Nigerian borders