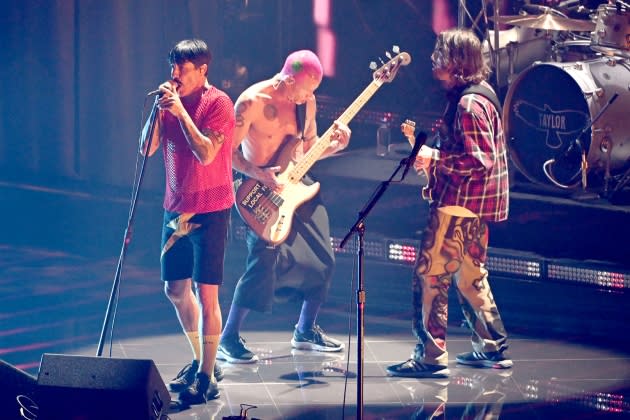 Introduced by legendary comedy duo Cheech & Chong as one of their “all-time favorite bands,” the Red Hot Chili Peppers took the stage at the MTV Video Music Awards in New Jersey on Sunday (Aug. 28) as the recipients of the 2022 Global Icon Award — commemorating the win with a two-song performance and some very emotional acceptance speeches.

The band kicked off their performance with “Black Summer,” the lead single from their 2022 album Unlimited Love, making the hands of the Prudential Center crowd wave in the air. Then they switched to the funky slap-bass grooves of their 2003 Besides With the single ‘Can’t Stop’ the group worked itself so frenziedly that drummer Chad Smith threw his drumstick in the air during a break and couldn’t catch it on the way back.

“I wanted to thank the cheeky mistress known as MTV for supporting us for 1,000 years or more,” frontman Anthony Kiedis began the band’s acceptance speech after the medley. “But really, really, really, I want to think Flea and John and Chad Smith… because they’ve given me purpose in life for the past 40 years.”

Smith’s kit featured a “TAYLOR” decal on the bass drum during his performance, in tribute to the late Taylor Hawkins of Foo Fighters, recipient of the VMAs 2021 Global Icon. “There is another musical icon – a global icon – and his name is my brother Taylor Hawkins,” Smith explained in his speech. “And I want to dedicate this to Taylor and his family – I love them and I miss him every day. Fly on, Hawk.”

Bassist Flea was the most effusive of them all in his speech – expressing his love not only for his bandmates, family and fans, but also for “cockroaches and dirt and trees, and every human being…and deer and deer antlers, and birds and sky .” He concluded with the conclusion, “Anything that is not love is cowardice.”

Unlimited Love debuted at No. 1 on the Billboard 200 album chart earlier this year, while “Black Summer” topped the list Billboard‘s Rock & Alternative Airplay Chart. The group has won eight competitive VMAs in their career – most recently winning Best Art Direction in a 2006 video for “Dani California.”