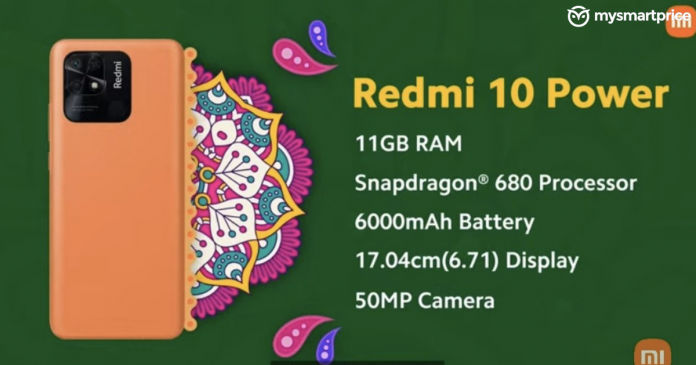 Xiaomi has launched the Redmi 10 Power alongside the Redmi 10A in India today. The device announcement comes shockingly when users were only expecting the Redmi 10A only at the launch event. You might think it’s a new device but it’s actually a Redmi 10 with more gigs of RAM and a new colour. The device was already tipped to launch soon in India

Did you really think we’ll do a Redmi Launch without adding that extra layer of SURPRISE?!

The Redmi 10 Power comes in a single configuration in India of 8GB RAM and 128GB of storage that is priced at Rs 14,999. It will be available on Amazon, Mi Home, Xiaomi’s official website, and offline retail partners shortly. Xiaomi hasn’t announced any sale date for the device.

The Redmi 10 Power features a 6.71-inch IPS LCD display with an HD+ resolution. The screen supports a standard 60Hz refresh rate and comes with Gorilla Glass 3 for protection. The device gets powered by a Snapdragon 680 SoC that is paired with 8GB of LPDDR4x RAM and 128GB of UFS 2.2 internal storage. It supports virtual RAM technology which means that it can expand its RAM up to 3GB. The device boots on Android 11 based MIUI 13 out of the box.

For the optics, the device features a 50MP dual rear camera setup that is accompanied by a 2MP depth sensor. Selfies and video calls are handled by a 5MP front shooter. The Redmi 10 Power packs a beefy 6,000mAh battery with 18W charging support out of the box.

More details will be revealed once the device gets listed on any online store. That said, the company has also launched Redmi 10A in India, you can check out the full specifications and price of the device from here.