Prey is finally with us. Instead of a cinematic release it has gone straight to streaming – either Disney+ or Hulu depending on where you live. After 2018’s The Predator I was not really looking forward to another Predator movie, but when the various trailers and clips dropped I began to feel a sense of excitement building.

Does the final product live up to that feeling?

Oh, you tease, I hear you cry.

Okay. I enjoyed the new film more than most of the other Predator sequels. It looked gorgeous. Had great performances and the Yautja was fantastic.

I do feel that in order to review the new film, we have to look back at what has gone before.

John McTiernan’s 1987 Predator is a stone-cold classic. I absolutely love it and it st Arnie is at his best and we saw the beginning of what should have been a legendary series of films. Instead, we got a mish-mash of movies, but some excellent comic books and video games that built up the Predator universe. Some reviews have said that Prey owes a huge amount to the original film. Not just the obvious fact that it started it all and gave us the titular creature, but Dan Trachtenberg’s 2022 uses many of the basic plot beats from the 1987 film.

The various sequels were very hit and miss. I personally thought Predator 2 was lots of fun. I know it gets a lot of stick, but I loved how they moved things to the big city and brought in cops and crooks to be taken out by spears and high-powered frisbees. Seeing the Detectives trying to work out the mystery of who or what is behind the killing spree is great to see. It expanded the Predator tech and lore and teased that they had been visiting Earth for a long time. Plus you’ve got Gary Busey chewing up the scenery for all it’s worth.

2010’s Predators was basically the first film retold on a different planet. Initially, I was not that big a fan of it but over time I find myself enjoying it more with each retelling. 2018’s The Predator feels like there was originally a great idea that just got mushed up in rewrites and bizarre editing choices. A true disappointment from Shane Black that should have been the return to greatness that every Predator fan hopes with each new film. 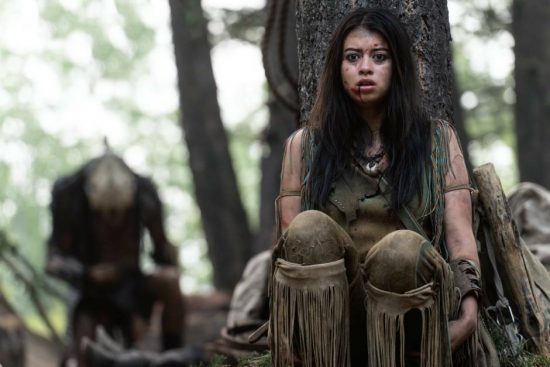 Okay, let us return to the new film. Prey is a prequel to what has gone before. That tease at the end of Predator 2 pays off here, but it also means that what is kind of a happy ending possibly results in tragedy at some point after the film ends. I am getting ahead of myself but you will know what I mean once you watch Prey.

Amber Midthunder plays Naru, a young Comanche woman who wants to do more than go out and gather food and tend to the wounds of the tribe. She wants to hunt. We see her going off on her own to practice her skills. At one point, her brother tells others that Naru is a good tracker and knows medicine. She is not a character who can just do whatever, without earning it, she has obviously spent a lot of time honing her skills, so anyone who says otherwise was not paying attention. Like the survivors of the previous Predator movies, Naru’s greatest strength is watching and learning. The more you observe about the Predator and the environment, the more chance you have of surviving.

Midthunder was great whenever she appeared in the Legion TV show and it was good to see her in a lead role. She is great in the role and does great work in the many action scenes. The supporting cast is also good, but this is mainly Naru’s journey.

The film itself looks gorgeous. They make the most of the beautiful scenery, which gives a sense of scale and time to the proceedings. Having the Predator chasing people across the grasslands is a great moment (briefly seen in the trailer). It is such a shame it did not get a cinematic release as it would have really popped on the big screen. I was lucky enough to watch it using my projector so I did get some of the big screen experience, which may have helped further my enjoyment of the film.

The Predator itself is a truly vicious bastard in this one. 1987’s version did seem to be almost a more honourable hunter. 2022’s version is more than happy to go toe-to-toe with its prey and almost seems to revel in the brutality of killing. I also enjoyed seeing more of the Predator hunting other creatures as well as humans. There are not many ways to build the character of an invisible killing machine, but seeing more of its kills certainly helped. The creature design was also good with the skull-like helm setting this hunter apart from what has gone before. Plus the tech being slightly less advanced than that seen in the 1987 film was a nice touch.

The action throughout was fast, vicious and brutal. Limbs go flying, spines and skulls are ripped out and there are wounds aplenty. There are some creative kills throughout the film, yet the camera does some to slightly turn away from some of the initial hits in one scene and then lingers over wounds in another. The CG elements are generally good, but as with many films these days, maybe giving the CG artists some more time would have been helpful. There are quite a few CG animals in the film. They’re all pretty good, but you know they are not real.

The first half of the film is all about character building. I always enjoy that and was glad it took its time. We got a sense of the tribe and the day-to-day life of Naru, before the action begins. The initial appearance of the Predator ship was a fantastic moment. 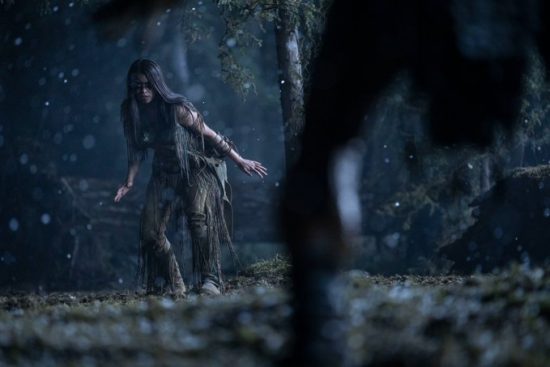 The final third is all about action with the Predator just cutting loose and taking out lots of people. It also takes a huge amount of damage and just keeps going without the need of any crunched-up plasterboard and that weird thick goo from Predator 2. It is weakened and very pissed off by the time we get to the final showdown. Going the Arnie route, Naru uses what she has learnt of both the alien creature and the environment to battle it. There is also a great deal of luck involved, especially in the placement of various things, but every action hero has a lot of luck. I did appreciate the fact that, although the scene was dark, they made sure you could see what exactly was going on at all times.

As for the tie-in with Predator 2 at the end. Initially, it is a nice touch, but there is now the fact that at some point, Naru or one of her descendants is not going to have a good time when another Predator comes calling. Is it just ill-thought out fan service or a promise of a sequel?

On the whole, the film kept my attention and Naru was a great protagonist. The script was solid with some nice callbacks to the 1987 film. Some of the lines that seemed heavy handed in the trailers play a lot better in the film itself.

I enjoyed my time with the film, yet I feel it was missing just that little something to push it to greatness. The frustrating thing is I am not sure what that thing is. I am looking forward to watching it again. Maybe, as with Predators, my enjoyment will increase with every viewing. Only time will tell.

Prey is a good, solid Predator movie and it would have been great to see it on the big screen. After the original film, this is probably the best of the sequels (yes I know it is technically a prequel). It is not really doing anything new, but its back-to-basic approach is refreshing after the Alien vs Predator films and 2018’s messy entry in the series. Definitely worth seeing if you are a fan of the franchise.

I hope we do not get a direct sequel to Prey. I would rather have more films set in different time periods with different people involved. Keep mixing things up.

The thing about all the Predator films is that they have so much potential. Even the worst ones have some nuggets of gold. You could take every character’s background from Predators and spin off a story set in the environment they were all taken from – the various war zones, the drug cartels of South America, the Yakuza in Japan and a high security prison. Imagine a Predator getting mixed up in any of them. Even the Alien vs Predator movies have some things worth looking at. I always loved the Predator in Aliens vs. Predator: Requiem, who I always felt was like Harvey Keitel’s Mr. Wolf in Pulp Fiction.

Ever since Predator 2 and now with Prey history has also been rife with storytelling possibilities. Imagine a World War II movie with a bunch of soldiers in the trenches or in an abandoned city and halfway through both the Allies and the Germans have to team up to battle a Predator. Have one visit Ancient Egypt and be the basis for an Egyptian God. You could have a classic British period drama in a Downton Abbey style with the Posh people on a hunt and then along comes the Big P.

Trachtenberg had indicated that the original intention was to market Prey with no reference to the Predators. I would have loved that but  can understand why it would be hard to do.

In all of the sequels, none have gone with, what I feel, is one of the greatest strengths of the original film. That is, start as one type of film and they switch to another once the Predator is revealed. True the original went from an action thriller to a sci-fi action thriller, but you know what I mean – The From Dusk Till Dawn scenario. Predator 2 was very briefly a solid detective movie and they could have spent a little longer with the cops before the reveal.

Picture a team of Ocean’s 11 type crooks are pulling off a heist only to be interrupted by a Predator.  After watching a few films recently such as The Gray Man, The Equalizer and so on, I think it would be brilliant to have a film where we follow one of those top Assassin type people and, during the course of their latest mission, they are hunted by the Predator and it is a true game of Cat and Mouse with each getting the upper-hand at different points and the assassin still has to get their target. Hell, start a film off like a romantic comedy and then have those three targetting lights appear and all hell breaks loose. Even something like a zombie movie, with various humans making it to safety only to then be hunted by an alien creature would freshen both of those genres.

Have you seen Prey? What did you think of it? Share your thoughts in the comments below.

NBC Dateline: What Happened to Rachel Owens? Where is She Now?