Actor Uche Maduagwu has called out Genevieve Nnaji and other actresses who didn’t make it to Rita Dominic’s marriage ceremony yet didn’t post online to congratulate her.

Genevieve Nnaji, Omotola Jalade, Oge Okoye, Stephanie Coker, and a few other actresses who have been in the industry with Rita Dominic weren’t at the marriage ceremony and some of them didn’t even make a single post online to congratulate her on her big day which is why Uche Maduagwu called them out.

Uche Maduagwu was very specific with Genevieve Nnaji because she has been in the industry with Rita Dominic for a long and also they’re from the same state hence he was expecting to see her show love by either attending in person or congratulating her online as some others did.

READ ALSO: Reno Omokri Shares The Best Way To Discipline A Child – Says Beating Only Makes Them Timid Or Hard

One can’t tell if Genevieve Nnaji called Rita Dominic to congratulate her off social media or not but she herself hasn’t been on social media for over a month now and we have no idea what she’s actually going through right now after that cryptic post she made about death.

Woman goes into labour on graduation day, receives her certificate at the hospital

Jada Sayles, a young American woman, has been blessed with two blessings in her life: an academic victory (degree) and becoming a mother. 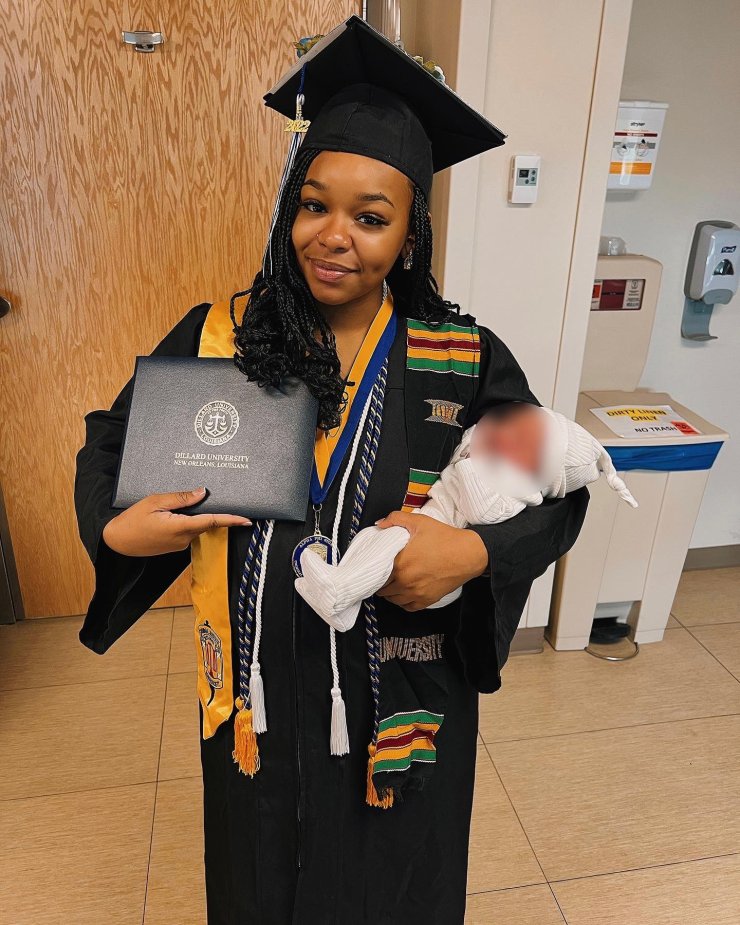 She was extremely pregnant when she went to her Dillard University graduation ceremony, but she went into labor before she could walk on stage and receive her diploma. 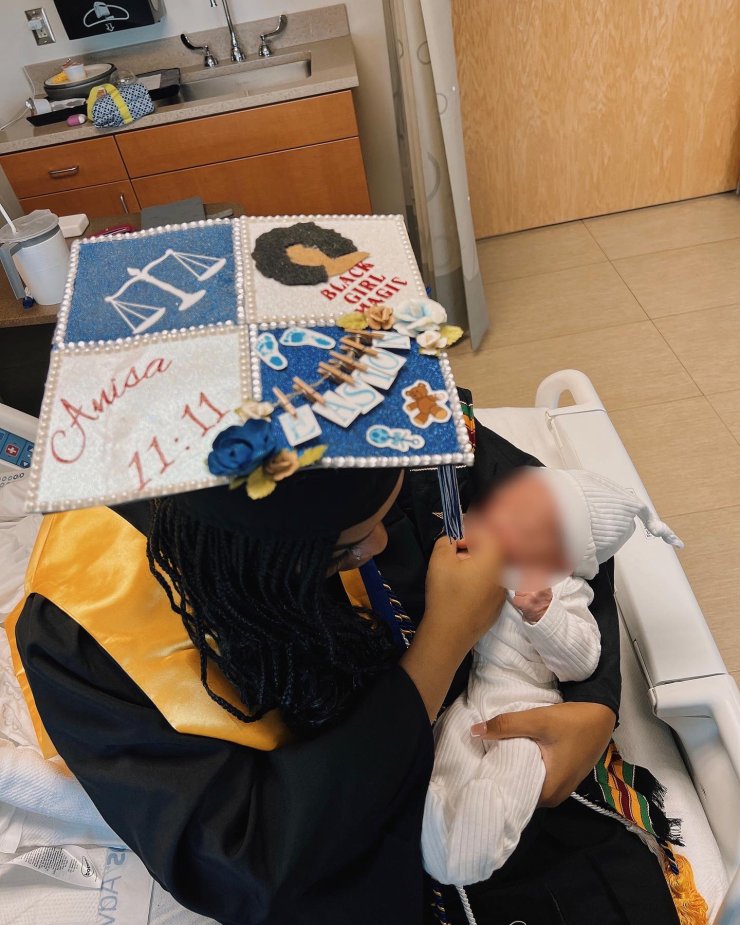 Taking to her Twitter page, the new mother stated that she had thought she’d be walking to stage to collect her certificate but her school it to her to the hospital after she went into labour.

“I thought I was gonna walk across the stage to get my degree, instead I got my baby. My sweet face decided to make his way on MY big day (now his).


Netizens react as man waits for girlfriend to clean off make…

Shoutout to my university for still bringing my graduation and degree to me. 🎓 Ima college graduate & mommy, talk to me nice! 🎉” 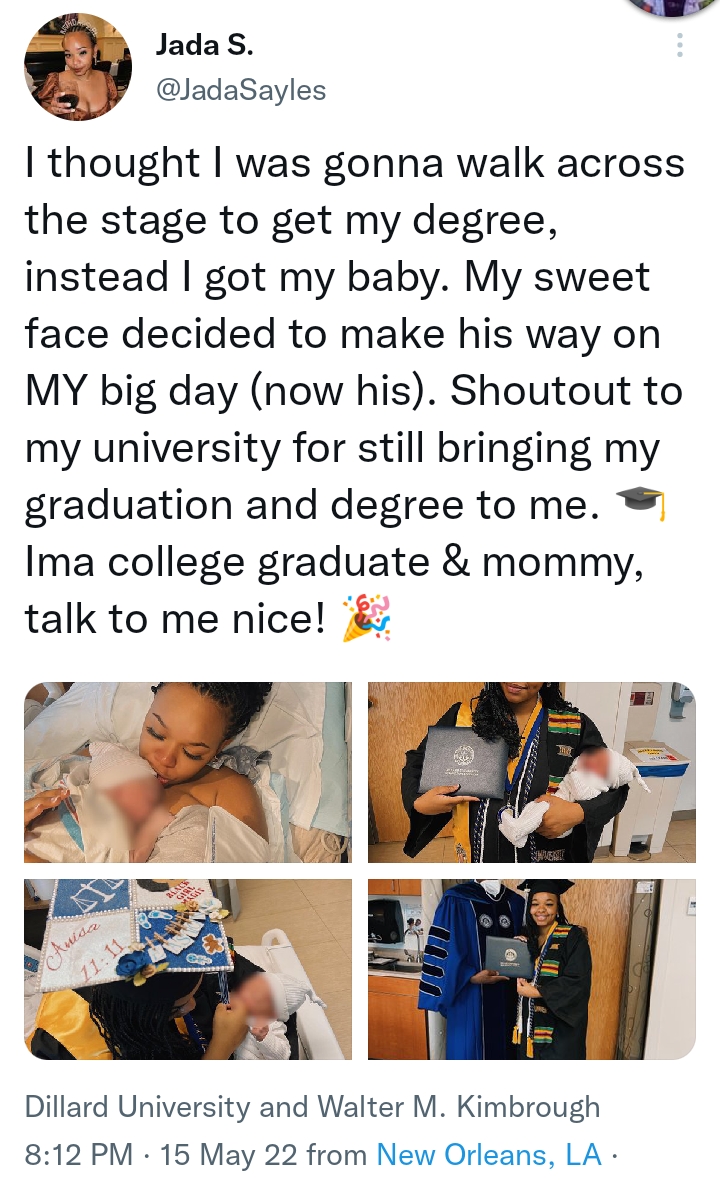 Actress Uche Ogbodo Shares A Throwback Video Of Herself In ICU

Nollywood actress Uche Ogbodo has taken to her page to share a throwback video of herself in the ICU after welcoming her second child.

The actress who is celebrating her birthday today has shared painful experiences she went through during the time of her labour and after she delivered her baby.

READ ALSO: Actress Uche Ogbodo Celebrates Birthday With Sultry Photos, Recounts How Scared She Was In The Labor Room

In a new post shared by the actress on her Instagram page, she was seen lying on a hospital grinning over the pain she was going through.

“This Was Me In ICU 😩😩😩, Going In and Out of Coma ..
People in ICU are always critical Guys . In this place I didn’t even remember I just had a baby sef , I didn’t remember no family not even my hubby that was there I No remember. I was just in Too much Pain and I couldn’t breathe. !

See Eeeh! In This Life , Prioritize Health and Life for only these 2 are Paramount! Its Just A thin Line Between Life & Death . Be Humble! 😔.

I am Still thanking God for My Life ooooo! I am Enjoying Myselftoday Drinking Big bottle Of Champagne and eating Chicken 🍗 😆😆😆.

READ ALSO: I’m Not Competing With You Aunty – James Brown Claps Back At Bobrisky For Mocking His AMVCA Dress

Asking section of the country to secede is “delusional arrogance”, Presidency replies NEF

Who Is jfauch09 From TikTok, Is The Account Related To Joseph Faucheaux?