As millions of Nigerians are groaning under harsh economic climate, a Professor and Pastor at the Redeemed Christian Church of God (RCCG),  Solomon Adekunle Bello has explained the reasons behind poverty within the Christians community and the steps to take to escape poverty.

Prof. Bello, Pastor in Charge of Lagos province 71 (LP71) who delivered the lead paper at the Business Summit of the Redemeers Men’s Fellowship of the LP71, Divine Connection Zone with the theme: ‘For Christians Not Be Poor, To Avoid Conflicts And Financial Crises’ said, “poverty is not for any true child of God. As long as men continue to sin against God, they will continue to struggle.”

At the summit which attracted participation from members in all the areas and parishes in the Divine Connection Zone and beyond, Prof. Bello who is also a lecturer at the University of Lagos described prosperity as a birthright of Christians while poverty is a curse.

He listed the major factors that brought about poverty as sin, laziness, curses, ingratitude, devourer, extravagancy, and procrastination.

He said, “Cursed and blessings are the results of the obedience or lack of it on the part of a man. The Bible informs us that poverty is a curse. It was the resultant effect of man’s separation from God in the Garden of Eden. Gen. 3:17-19.

He said some of the problems people experienced in their lives were caused by sheer laziness.

“Some people are actually under curses. They labour in the same office others are working in, they sell wares other are selling farm where others are farming, but when it is time for them to reap as harvest, they find themselves in trouble,” he said.

“What work for others does not work for them. Where others put their hand and record profit, when they put their hand there, that is the day the government will pass a decree, or their goods will be stolen or impounded, or fire will burn their store.

“When they have an interview, they want to attend so as to get a job, they fall sick and by the time they recover, the examination would have been over.

“Such people are laboring under terrible cruses which have been inflicted on them. They may be hard workers, yet they find themselves working like elephants and eating like ants. Jabez was such a person. (I Chronicles 4:9-10).”

On gratitude, he said “a man who knows how to show God appreciation is a man who is destined for great heights.

“An ungrateful man cannot go far in life. Gratitude will open the doors of breakthrough and success to you at any time.  Appreciation of God’s goodness leads to an appreciation of your blessings and worth before God and man. Luke 17:12-19.

“Appreciation of God leads to success in life. It is the shortest cut to victory. If you want the heavens to be opened for you, if you want to be made whole, then you must be ready to appreciate Him. When you return to give glory to God, He will return to make your life worth living. Divine upliftment comes in the place of gratitude.”

Talking about devourer, he said,  “Every disobedience has a retribution attached to it. When you obey the commands of God, blessings follow after, but when a man disobeys, the blessings are withheld. Joel 2:25-27.

“In this verse, God Himself speaks about His great army the devourers whom He had sent among the errant children of Israel.

“There are devourers who have been assigned against people who do not pay their tithes. Devourers eat up God’s blessings upon life of a man, whether in his finances, business, health or career. The reason why some people face continuous sickness, lack of progress and financial bankruptcy is traceable to a default in time-paying.”

He said many people were not really aware of the doorway to extravagancy “because it is a subtle agent of poverty (Luke 15:11-13).

“There is a time for everything in life. Eccl. 3:1-8. When it is time to sow and you eat everything, you will have yourself to blame. Jesus once made a statement to that effect that except a grain of wheat fell to the ground and died, it abode alone. He was saying in essence that the grain of wheat had to be invested in the ground so as to get a return of harvest.

“Riotous living always leads to wastage of substance. When it is time to sow and you eat your seed, at the time of harvest, you may find yourself in problem.”

Prof Bello also warned against procrastination, describing it as simply when you do the right thing at the wrong time.

“When a man knows what he ought to do and he does not do it; he is said to be procrastinating. When a man should invest his productive years achieving goals of time chasing after frivolities, he will undoubtedly reap the harvest of poverty. Mathew 21:28-30,” he said.

“If one wastes his life, he may lose his divinely ordained destiny.

“Procrastination is the theft of time, says an old adage. If you sleep at your duty post, you may not know when the master is passing by.”

He also shed light on the route to prosperity with 11 steps which include, wisdom, diligence, labour mystery of giving, the way of thinking, anointing, obedience, natural Gifts and endowments, blessing of right placement, praises, and breakthrough by the blood.

“The road to prosperity is a straight one if you can only understand it. God has already made every provision for comfort and upliftment. There are certain things you can do to unlock the heavens for yourself and your family,” he said

On wisdom, he said, “The Bible tells us that wisdom is the principal thing. With wisdom, battles are won, with it, success comes. By the application of wisdom, you will make a way for yourself.

“When you have wisdom, you can lay your hands on anything and make it in life. The secrets of life are revealed in the place of wisdom.”

He described diligence as the way to excellence in life, ministry, academics and so on, saying, “A man who is diligent is a man who will stand in high places. He is not an ordinary man. He will do extra ordinary exploits for the kingdom. The portion of diligent man is kingship and prosperity. According to the Bible, poverty has business in the house of diligent man. Prov. 10:4.

“God has promised to bless the work of your hands, but your hands must be found doing something so that His word can go into operation.”

“David was a diligent man while his senior brothers were having a good time eating, drinking and making merriment, he was fending sheep. (I Sam. 16:11-14).”

Besides labour, he said there is a place for the Gift of Divine Favour which cannot be worked for or earned.

He said, “When you have done your best and fulfilled your part, you need the crowning effort of God’s divine favour upon your life to record prosperity. (Prov. 11:27).

“If you can only get the Lord on your side, you will be made for life. Doors will open for you. No one can be against you when God is for you.

Explaining the mystery of giving, he said, according to God’s word, “Whatever you sow is what you will reap. If you sow cassava, you expect to reap same, if beans came out, you would have been very surprised.

“The same thing applies in terms of your prosperity. If you sow prayers, you will reap the reward; if you sow money; that is what you will reap.

“Giving is the only divinely ordained way of receiving. It is the surest way to increase in life. It unlocks the treasury of heaven that the rain of abundance may be released to you.

He also said that the way people are thinking goes a long way to determine what they will become.

“The strange thing about thoughts is that whatever you see yourself to be that is the way people will see you.

“Think big in life. Have a big vision of what you want your life to be because you cannot aspire beyond your dreams. Prov. 29:12.

“He that thinks big, projects big. A man who thinks big is a man who will make it in a big way. Another reason why you must think big is because the God you serve is a big God. When you begin to think right, your big thinking will be backed up by this big God.”

The panelists which include  Pastor Praise, Pastor Otokiti Williams, Brother Durosanya Oluwatosin, Mummy Iyabode Alayaki, Brother Abiodun Olayinka and Mummy Sofola Susan, and Dcn Aladeyelu spoke about  how a Christian can start a small business;  steps to take to avoid financial crisis at home; the purpose of wealth creation; other business a civil servant can run apart from monthly salary; why a Christian needs alternative source of income; steps to overcome indebtedness; Is ponzi money good for Christians; How does one reduce friends and family from borrowing; the pitfall to avoid when running business.

Pastor Joel O. Adewuyi, Pastor in Charge of Divine Connection Zone in his introductory remarks on the theme of the summit said the position of God is for Christians to prosper.

He quoted (3John 2) that says “We’ve all heard this before- Beloved, I wish above all things that thou mayest prosper and be in health, even as thy soul prospereth.”

He said if Christians can follow the path of God, there will be turn around in their fortune.

In his welcome address, the Zonal Redemeers Men’s Fellowship Coordinator, Mr Segun Adeleye said the theme of summit came from the consciousness that Christians in the country were not where they were supposed to be.

“Christians are crawling when they are supposed to be flying,” he said. 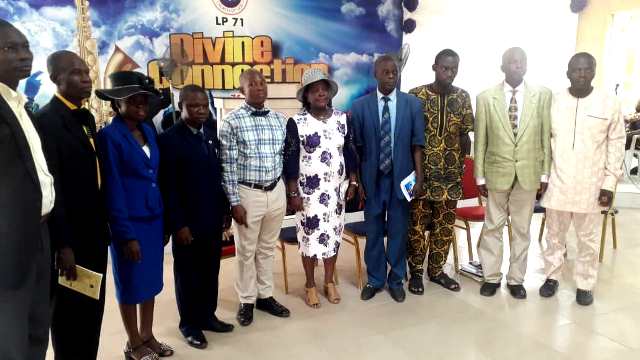 He said it was strange that most people didn’t know that they were poor as long as they could afford one fairly used car and struggle to put food on the table.

“But Philippians 4:19 says “And my God will supply all your needs according to His riches in glory in Christ Jesus. Do we bother to ask what God’s riches are? According to Haggai 2:8 ‘The silver is Mine, and the gold is Mine,’ says the LORD of hosts,” he said.

“If the silver and gold belong to God, then the logic should be that we His children should not be poor, but very rich. We can only be poor if there are things we don’t know. Like where God is keeping all the wealth.”

“One thing is clear, our destiny is hidden. It’s deliberate. We were born to seek and find out what we don’t know. We should be interested in knowing why we are here. We must be ready to learn,” he said.